skip to main | skip to sidebar

Is it just me, or don't you somedays just wake up with the uncontrollable need to put on fake eyelashes before leaving the house?

I guess, I do have a tiny little diva living inside me, after all.


I guess then, I shall go here to get them so my inner diva gets unleashed!
was artfully typed by L a las 2:29 AM 4 comments:

I've been a little busy lately, with my cake decorating classes (I'm so tired of making sugarpaste --fondant-- roses!! Will post pics later), and running all sorts of errands.

But last week I was able to go to the movies. It was an excellent movie, made me laugh and almost cry, made me think, made me change the way I see my own life.

Here is a small sample of the movie, based on a graphic novel. I saw the English-dubbed version, and I thought it was very good. Probably ask a Francophone and he or she will tell me it was the opposite. Oh well, I had no choice and I still enjoyed the movie a lot. Now I want to get the books!!!

Trailer is also available in Spanish, Italian, French and Deustch, just look up "Persepolis" in U toob.

So Happy Chinese New Year everybody!

The year 2008 will be a year of possibilities, a time of progress; although, it may not generally be spectacular. Those who take the biggest risks could be disappointed. Everyone should, nevertheless, add something new to their life.


So that is very good news, about the possibilities I mean. A ver qué inventamos ahora...

In the meantime, let me show you the food I made for you all to celebrate the New Year. (Actually, it was my aunt's birthday a few weeks ago, but the pictures seemed appropriate!)

I miss cooking for you guys...

Please refrain from licking the screen... the sweet and sour sauce is VERY hot, and I do not want to be held accountable for any speech impairments caused by the electric shock on the tip of your tongue.

All of the following pictures will pop-up to a larger size if you click on them.

DO NOT LICK THE SCREEN!

So here is where I was given the title for Fastest Egg Roll "Roller" of the West!!!! 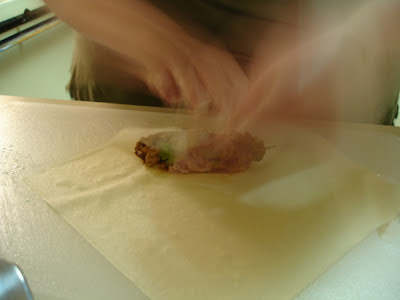 I rolled up 30 egg rolls in about 30 minutes, with a crowd of people watching because it was a last-minute addition to the menu and they arrived while I was still cooking. I felt like I was doing a cooking demonstration in the middle of a tornado. More on that ahead... 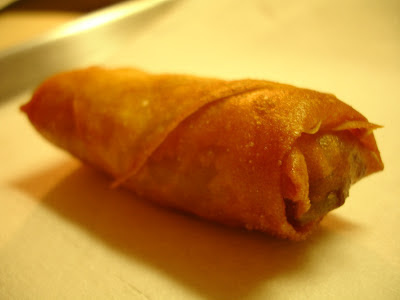 I know it looks a bit different than the ones I used to make back home. I cheated a little bit this time, and used frozen Egg Roll Wrappers instead of making the crepes myself. I actually wanted to make everything from scratch, but I had very little time to cook. In the end, they still came out delicious and it was less work!!


And finally, the lovely Egg Roll drizzled with Sweet and Sour Sauce!!!! Over to this side, we have the wonderful Fried Rice Explosion. 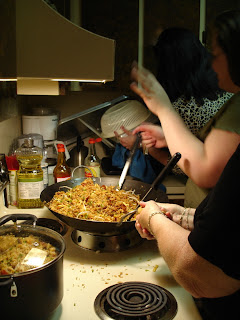 I had a bit of a hard time tossing it in that huge wok, as you can judge by the rice scattered over the stove.... Since the house has an electric coil stove (which I hate), the wok has to sit on a ring over the metal coil so it will heat evenly. The problem with this, is that it spins and slips around. Hence you will see an extra pair of hands holding on to the wok. Nonetheless, rice still flew all over the place.

The picture was actually taken while I fumbled to catch all the baking sheets and bowls that were sitting on the dish drainer. My mom was trying to clean up while I tossed and suddenly they started to fall all over the place, or I should say, all over me cause the sink is right next to the stove...

You´ll also see a second pot on the back burner, full of already-made fried rice.... Cubans eat A LOT OF RICE.


It was a bit nuts, with all the egg roll-rolling-demonstration, the rice tossing-explosion and 13 Cuban ladies talking VERY LOUDLY..... ALL AT THE SAME TIME!!!


But, all's well that ends well. This food was actually cooked to celebrate my aunt's birthday with her family. So of course, there had to be a cake. Unfortunately, she has diabetes, and I didn't have time to experiment with a new Sugar-Free recipe. (I keep saying I didn't have time because the night before, it was decided that we would cook this dinner!).

So, being in the land of plenty that I am, I bought the cake which is made especially without added sugar. I did, however decorate the cake a little bit, just so it wouldn't look totally store-bought.

These are some of the icing flowers that I learned how to make over the summer... 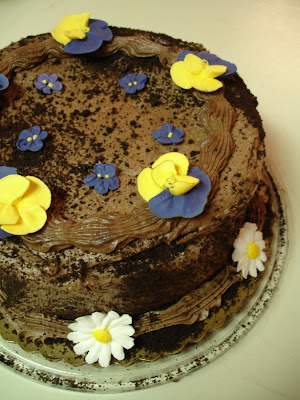 To keep in mind in case money is needed...

69%How Addicted to Apple Are You?
was artfully typed by L a las 2:51 AM No comments:

Oh for the love of god

There's even a frost watch, and they said in the news to bring your plants inside the house and put sweaters on your pets...

And to think I got rid of most of my blankets... at least I kept the flannel pajamas!

Yours truly, frezzing in Not-so-sunny-Florida.
was artfully typed by L a las 1:52 AM 1 comment:

It has been said that a cold front will be affecting my current geographical location.

I have to get my coat out of the closet and let it ventilate. It hasn't been used in such a long time. But I doubt I will be using it. Here they tend to make a big fuss of weather forecasts... and almost 80% of the time, the opposite happens. So I'm not really expecting too much cold anyways. IT will be nice, for a change.

However, the wind... extremely strong. My desk is right in front AND next to 2 windows... And the wind is fiercely howling. I think I will have to put some music on so I can actually go to sleep and not have to worry about the WHOOOOOOOOOOOOOOOOOOOOOing that is now constantly roaring next to me. I'm actually somewhat afraid to move the blinds aside and look out the window in the overwhelming darkness of night....
was artfully typed by L a las 2:06 AM No comments:

FYI...not that you needed to know..

Ok... so first this was my therapy. Now, I think I'm just going to post pictures of whatever comes to mind. Needless to say, my photography skills are still lacking, but at least, you get the picture.

I might, just might, occasionally write some non-sense or two, but I will try to spare you.

Books on my nightstand, awaiting for me to start/continue/finish reading:

* "The Time Machine" by H.G. Wells
* "Siddhartha" by Herman Hesse
* "The Martha Rules" by Martha Stewart

To wear or not to wear sunblock today? THAT is the question

No había pugs, so this will have to do….

Blast from the past!